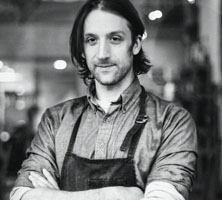 David Levi ’00 is the executive chef and owner of Vinland restaurant in Portland, ME, the world’s only 100% local food restaurant. For five years, Vinland has forged a cuisine of place, drawing from culinary traditions near and far, but always, exclusively using ethically sourced ingredients from Maine. Honored with a maximal five star review in the Portland Press Herald, Vinland has drawn accolades from the Wall St. Journal, NPR, and The Financial Times, the latter hailing Vinland as “a serious star [and] the place Portland needed to crystallise its gastronomic ambitions once and for all.”

A Dartmouth graduate with a degree in history, David earned his MFA in poetry from Bennington. Apart from his kitchen career, David was a high school teacher for five years, having taught both history and English. Like teaching, David’s work at Vinland is an effort at consciousness raising. Indeed, the cuisine is contextualized by history and culture and shaped by a poet’s appreciation for the virtues of form.

Vinland draws inspiration from restaurants on the opposite side of the North Atlantic like Copenhagen’s Noma and Sweden’s Faviken. David trained as a stagiaire at both. Like those celebrated European counterparts, Vinland seeks to craft and elevate a local cuisine in a place without much of a preexisting culinary reputation. Unlike those counterparts, Vinland does so not to push the envelope in rarified experimental cuisine at extraordinary price points but to forge an accessible cuisine crafted with mindfulness; affordable and approachable enough to enjoy regularly