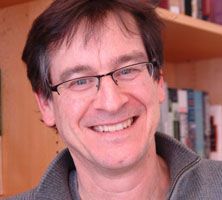 Don Mitchell (PhD, Rutgers University, 1992) is Professor of Cultural Geography in the Department of Social and Economic Geography at Uppsala University and Distinguished Professor of Geography Emeritus at Syracuse University. His work focuses on historical and contemporary struggles over urban public space and the city more generally, the relationship between labor and the geographical landscape, and the geography of culture.

He is the author of five books, including They Saved the Crops: Labor, Landscape and the Struggle over Industrial Farming in Bracero-Era California (2012); The People’s Property? Power, Politics and the Public (2008, with Lynn A. Staeheli); The Right to the City: Social Justice and the Fight for Public Space (2003/2014); Cultural Geography: A Critical Introduction (2000); and The Lie of the Land: Migrant Workers and the California Landscape (1996).

Along with the late Neil Smith, Mitchell is the General Editor Revolting New York: How 400 Years of Riot, Rebellion, Uprising, and Revolution Shaped a City (2018), and the editor of Food Across Borders (2017, with Matt Garcia and E. Melanie DuPuis) and Landscape and Justice (2009, with Kenneth Olwig).

He is currently at work on a book called Mean Streets: Homelessness, Public Space, and the Limits to Capital.