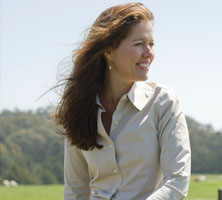 Nicolette Hahn Niman is a writer, attorney, and livestock rancher. She authored the books Defending Beef: The Case for Sustainable Meat Production (2014) and Righteous Porkchop: Finding a Life and Good Food Beyond Factory Farms (2009), as well as numerous essays for The New York Times, The Wall Street Journal, and Los Angeles Times. She has also written for The Atlantic, The San Francisco Chronicle, and The Earth Island Journal, among others. She is a frequent keynote speaker at regional and national conferences, and was one of just 23 speakers from around the world at the Nobel Week Dialogue 2016 in Stockholm, Sweden. She has appeared on The PBS Newshour, The Dr. Oz Show and in numerous films and documentaries, including Eating Animals (2017) and Sustainable (2016). Previously, she was Senior Attorney for the environmental organization Waterkeeper, where she focused on agriculture and food production; before that, she was an environmental lawyer for National Wildlife Federation. Hahn Niman served two terms on the City Commission for Kalamazoo, Michigan. Today, she lives in Northern California with her two sons, and her husband, Bill Niman, founder of the natural meat companies Niman Ranch and BN Ranch, acquired by Blue Apron in 2017.